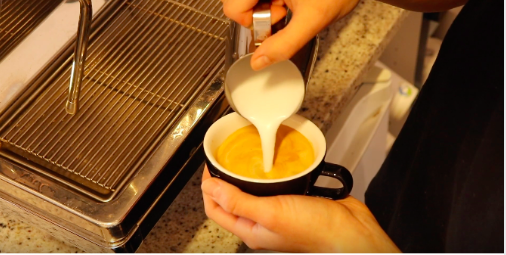 While we’re on the topic of what this is over that, how about the various ways espresso and milk can be served.

First things first, there’s been some slight adjustment to our menu! With the re-introduction of (compostable) eight ounce cups, we are able to serve Flat Whites and Traditional Cappuccinos. Cortado’s and Macchiato’s are also available upon request. These could just be words, but this is where I really get to geek out and share the differences between these drinks, the main variable being milk and why changing the amount creates a whole new experience.

How Many Ways Can You Have Espresso + Milk

All our milk drinks start with two ounces of espresso, AKA a double shot and then steamed milk is added in some sort of fashion. Just like how espresso recipe’s are unique to each cafe depending on so many variables, so is the practice of milk. For example, ordering a flat white through us could be a completely different drink than one you would receive at a second wave coffee shop, the biggest indicator is if the size is asked. While most specialty cafe’s will remain fairly similar, there is an internal standard agreed upon and then taught to be repeatable throughout the staff, making it possible to vary cafe to cafe.

The following are drinks that when ordered through us, follow this type of preparation.

Latte: probably the most familiar. Espresso + milk (and micro-foam. If you are interested in an intro to steaming milk and why it matters I took a crack at explaining it here). Also defined as a long milk based drink with enough micro-foam for latte art and milk sweetness.

Cappuccino: maybe familiar, but a varying type of drink between second and third wave cafes. The main differentiator is the air introduced while steaming milk is a tad more than a latte making it ‘drier’ than that sweet and creamy foam that tops a latte, but nothing extreme. Traditionally served in an eight ounce cup making it equal parts steamed milk and foam at a temperature immediately ready for consumption.

Flat White: served in an eight ounce cup, it’s a short milk based drink with the proportions focused on the espresso, but textured similarly to a latte, also served at a drinkable temperature.

Cortado: similar to a flat white, but much less textured and served (typically) in a six ounce glass or cut short in an eight ounce cup, again, at a temperature that would allow for instant sipping.

Macchiato: double espresso marked with a bit of steamed milk/micro-foam.

If you’re used to popular menus curated by second wave cafes, flat white and macchiato could be terms you have come across, but an entirely different drink comes out from the other side of the espresso bar. A ‘flat white’ could be any size from eight ounces to, dare I say, 31 ounces, and a shot of espresso dropped over steamed milk. A ‘macchiato’ tends to refer to a drink that is based with syrup, lots of milk, and an espresso shot, and caramel sauce. The focus will be less on the espresso and more on the milk or added sugar. Different philosophies, different target audience!

The purpose of this ever shrinking size on our menu is the approach of concentration, bringing the focus closer and closer to the main idea, the star of the show if you will. Our coffee and your experience.

There are no items in your cart